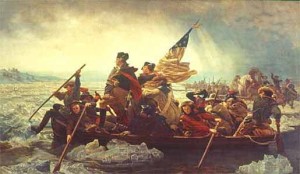 I’m checking in to let everyone know that I’ve been in PA for the long holiday weekend; my family held its annual summer reunion over the Fourth of July.

Has anyone ever heard of “Revolutionary War Re-enactments”? Two of my brothers-in-law, Robert Scordia & Paul Beck, are members of the GLOVER’S MARBLEHEAD REGIMENT. Over the weekend a partial re-enactment of the Continental Army’s encampment was planned at Washington Crossing Park along the Delaware River. My two sisters, Laureen and Denise, and one nephew, Rob, were also going to be part of the event which requires dressing in “period costumes”.  An extra woman’s “kit” was available and guess what? That’s right…I donned the bonnett, skirt, and vest (and more) and spent a good part of the day going back in time to 1776 where “there were no Verizon bars.”

The experience was QUITE EXHILARATING and I highly recommend it to others.  Reliving and  relearning the facts of December 26, 1776 deepened my already strong appreciation of America’s freedom and the astonishing efforts of those men and women who fought and sacrificed to bring the declaration of INDEPENDENCE DAY to fulfillment for the Colonists.

Note: Google “Colonel John Glover of Marblehead Massachusetts” for the back story.   (;>0