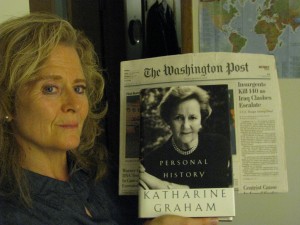 This is a week of reflection for me going back in memory to the summer of 1974. I’ve waited thirty-five years to tell this story linking historic American political events, my proximity to them, and a great American woman, Katharine Graham.

Known by year-round residents as simply the “Island,” the high-end real estate on Martha’s Vineyard’s was happliy being  sold to high-end buyers. Katharine Graham, owner/publisher of The Washington Post, had purchased a large parcel of land located in West Tisbury, bearing the name Mohu. In 1974, this spectacular and storied property, at one time a visiting spot for Calvin Coolidge when he was governor of Massachusetts, boasted two-hundred eighteen acres with a fresh water pond complete with swans and a stretch of beach frontage bordering the West Tisbury Beach.  A Vineyard company,  Manley Tree Experts,  had secured the prestigious contract to define the land thereby showcasing the magnificent views from the numerous decks and windows of the main house. My husband James was on the chainsaw-weilding crew reshaping the acreage of Mohu.

Dick Manley, a respected Certified Arborist, had been asked to recommend a young couple to “become year-round caretakers of Mohu.”  Word got out among the tiny winter populace of the Island and the competition for this unique opportunity began. Dick recommended us.  After successfully completing two interviews held in March of 1974 with Perry Wheeler, a renowned D.C. Landscape Architect, and Liz Hylton, Mrs. Graham’s personal assistant, we were hired. Talk about HOPE for CHANGE! No longer drained of our earnings by excessively high oil bills in our drafty Vineyard Haven rented house, we were now living in the newly refurbished caretaker’s house. With regular earnings from our duties caring for the buildings and grounds, we reaped an additional benefit – health insurance – quite a provision and blessing since I was pregnant. Living at Mohu had become our “Camelot.”

For the next three summers,  Mrs. Graham’s elegant entertaining events welcomed her friends and colleagues from the news, television, and publishing industries, and from her beloved Washington, D.C., to the lovely tranquillity of Mohu. Over the years I have thought of writing a book recounting some of the hilarious and, at times. not-so-hilarious escapades featuring her accomplished guests. For this article, I’ve chosen two memorable vignettes.

The first was the day we heard a knock on our door and Mrs. Graham’s voice calling, “Sarah, James …” and as Mrs. Graham stepped in we found ourselves and our ten-month old son, Timothy, face-to-face with Jacqueline Kennedy Onassis. Our mouths dropped open at the sight of our nation’s former First Lady, quite the auburn-haired beauty as reflected in her world renowned photographs.  Without hesitation, Jackie pulled Timothy out of James’ arms, into her own, and exclaimed, “What a beautiful creature!” Several minutes of polite conversation followed and we parted company basking in the afterglow of having met Jacqueline Kennedy and completely impressed by her kindness and lovliness.

The second was the evening of August 8, 1974 when James came running hurriedly into our galley kitchen exclaiming, “Mrs. Graham is calling for you, Sarah!”

Speedily, James & I made our way to the main house and into the staff’s wing and kitchen. Sitting there were Mrs. Graham and her two personal maids, Dora and Lucy.  “I wanted you to see this…” she said to me pointing to the television. As I turned toward the television and the room hushed, all five of us sat and watched what had never been watched before –  the televised resignation of an American President, Richard M. Nixon. History was being made and Mrs. Graham wanted to be sure that James and I didn’t miss the moment. Who would have ever thought that we’d be in the company of the one woman in American news journalism responsible for bringing down a US President.

Since my first meeting with her, Mrs. Graham has been an inspiration to me. Over these last thirty-five years, Mrs. Graham’s example of courage and leadership while overcoming personal tragedy and gender-prejudices has brought me HOPE for achievement of my dreams. Mrs. Graham was a champion for women moving forward with determination, vision, and assurance of their destiny. By her example, she has taught me to leave behind familiar parameters, CHANGE from within, and adopt and adapt to new frameworks for success.  Mbele!

Sarah, thanks for sharing your story.....maybe you should write a book!

There's definitely enough material for a book between the two of us; could be entitled, "Summers at Mohu" or "Hilarious Antics on the Vineyard"; any other suggestions????

Terrific article Sarah... You & James were very fortunate to have had the opportunity to meet such extradinorary people during an especially tumultuous time in American history (i.e. Watergate). I have always admired Jacqueline Kennedy for her strength & courage. Do you have any photos of Mohu to post? Thanks again for sharing! Sandy

Hi Sarah, Great article. It was amazing to imagine you and James so young and just getting started. Boy that was a long time ago. Praise God for the seeds that were planted. Onward and Upward!! Love, Eddie and Jackie

Sarah - Wow. Just that little insight into JO's humanity added so much to that vignette. Imagine how much you could create by digging into your enlightened memory to bring information, history and openness to your readers. Not easy stuiff to do, often exhausting and sometimes painful, but manifests a reality of your life for others to share. Who was Sarah before the Lord? Who does Sarah want to be in the Lord? Live your momemts of change, your impactive experiences through your words so they become an experience for others. ...not just a read. Bring home the smells of India; the crusted eyes of a desperat , dirty baby, the simplicity of a single item dinner served from a single bowl. You have been touch by the blessed light. Call the book AGLOW. Your servant, Barry

Sarah - Sorry 'bout the typos. B

was at the beginning of "James & Sarah", it is true, and life has been full with a bit of everything; and now... the happiest time of my life! love both of you! Sarah

thanks for good words, Sandy! do have photos of Mohu, plan on including them in my book! hahaha! know any interested publishers???

super words of wisdom, Barry, from your kaleidascope (sp?) journey through life. I will absorb them. Except, for now, the book title - already have another simmering in the cooking pot. (;>0 Sarah

Unfortunately I do not know of any 'publishers' Sarah..but I DID happen to meet a record producer while in Boulder... he was VERY interesting, as are most people from that area, he spent several yrs living in Nepal with the Buddist Monks. Hope you keep writing... you are a gifted & very natural writer! Sandy

Sarah, Thanks for leaving me the message. I enjoyed reading this! Lynn

To me Sarah, you have always presented yourself as a blank slate upon which only He can write. Thank you thank you for your obedience. Suzie

Lynn, yes, I thought reading about the Vineyard would interest you! Thanks for comment. Sarah

Hello, Suzie! Happy to hear from you and I appreciate the encouraging words! Hope to see you soon. Sarah

This is very interesting. I was trying to find a picture of what Mohu looked like on the internet and couldn't find one. I know Bill Graham tore it down. It sounds like the house was quite beautiful. I grew up in DC during the 60s so Mrs. Graham was a big part of my youth.