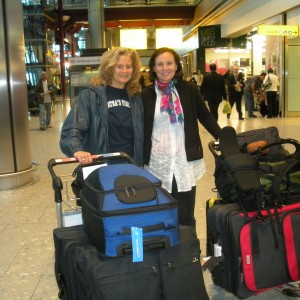 After riding Adirondack Trailways bus from Kingston, NY to Port Authority, New York City, on Thursday, October 1, 2009 Sarah Bird and I made our way through the bustling terminal with the help of a Trailways luggage porter to the Airport Shuttle pick-up on 42nd Street which transported us to JFK International Airport. Our Korean driver navigated through massive traffic in Manhatten and the borough of Queens with impressive driving skill getting us to British Airways Terminal 7 at 4:45 a bit later than stated in the shuttle schedule but plenty of time for us to get to the “Fast-check Luggage” counter and receive our boarding passes for the 6:55 p.m. departure for Heathrow Airport outside of London.

The six hour flight through six time zones on BA174 went smoothly as the Aircraft 747-400 was nearly full. My seat assignment was 41c, an aisle seat, next to a helpful young man from Sofia, Bulgaria who lifted my carry-on to the overhead locker; Sarah was nested back four rows and on the other side of the aircraft. Our travel specialist, Regan Murray, had pre-ordered my dinner, Asian Hindu Vegetarian, which I thoroughly enjoyed  and recalled eating the same meal on my inbound trip last October. I do not sleep, generally, on flights, and not a wink was had on this one through the night but I was relaxed and comfortable nevertheless.

Our landing was smooth and after processing through immigration and customs with no problems, we took the elevator down to luggage carousel #10 and, to our delight, claimed all five of our luggage pieces. So far so good. Our Coventry host, Mike Holt, met us in the reception area at 7:45 a.m. and after some morning tea from Chistos we were off of for the two hour ride to Mike and Jen Holt’s home in Coventry. I am enjoying Jen’s scrumptous cooking, lively conversations about Literature, British politics, and World War II with both Mike and Jen who are retired school teachers. More about them and what we did today in my next blog.

I sat earlier writing this at the kitchen table drinking my umpteenth cup of tea today.  I know why they (the British)  drink it so much! To keep their bones from over chilling, never mind the influence of the Chinese.  I can see why the idea stuck around.

Along with the tea, I’ve heard all the infamous words you hear in the movies: smashing, gobsmacked, brilliant, fantastic, crikey! (sp.)….and we’ve only been here for two days.  And you know what they say, right?  When in Rome…so when Sarah and I and our host, the Holts, sat talking, hunched over a huge ancient, but fantastic map of London, and I mentioned that I’d like to visit a teashop on Monday, they asked, “Along with your fish and chips?”  I said with perfect enthusiasm, “Brilliant!”

Of course, when mentioning the guided running tours of London, all I received in return were blank stares.  No one can understand a running junkie like one of the same; and I suppose I am the only addict in the house, crazy enough to actually want to lope through the streets of London to see it, rather than ride a bus or amble slowly like other normal tourists.  Since reading about this smashing idea on the plane, I have been practically drooling about the possibility.  Knowing my luck, however, I’d be gazing into a tree at a magpie and run head first into the Queen or a prince, ruining all chances of making a good impression.  We all know curstying is not my forte.

So perhaps running through London may not be on the list of things to do while in town, I’m fully content to just be here, making the most out of this God-given journey one step at a time.  Already He has done so much for us; our trip from Kingston to Coventry has gone amazingly well.

By the way, did you know that the word “squash” does not always mean vegetable?  Indeed!  It also finds it’s meaning as “yes, this fruit drink is very powerful, so you might do well to put some water in it”.  Who knew?

Well Ladies, I was amazed that you started your trip on a Trailways bus. Vera and I would have been honored to give you a ride to the airport. Any way, I am glad you made it to your first destination. I am glad that Sarah B. is adapting to tea time. We'll be keeping tabs on you so don't get into too much trouble. Later, Paul

Hi Sarah & Sarah, What a lively blog you women have posted... I thoroughly enjoyed reading about your trip to England & subsequent "tea time" with your guests in the UK! I've traveled to & from London on numerous occasions, so I have an understanding of the British vocabulary & culinary customs! (Yes, I LOVE fish & chips, w/vinegar of course, and I've pushed a pram thru the city when my son was a baby, ie. stroller!) Please have a safe trip to India & looking forward to reading your next blogs, Best regards, Sandy Nickerson