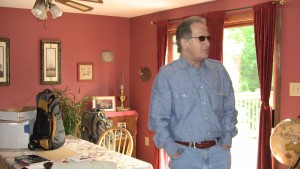 The countdown until James’ departure for Africa on June 16, 2010 has come and gone a week ago. Earlier today, Wednesday, June 23rd, we spoke using his Motorola phone with a SIM card. James is adjusted to the environment in Sakila Village, Tanzania. As his wife, I was relieved to hear that!

Since his arrival, there has not been electricity in the village, or more accurately, the supply has been intermittent. James does not forsee having electricity to power his lap top or the Internet until next week. In light of that I will post these “send-off” pictures in the meantime.

When I spoke to our African H4C partner, Eliudi Issangya, this morning he was exhuberant when declaring that, “James had arrived safe and sound. ” Eliudi will host James during the visit without the help of  his wife, Mama Helen, who died on February 2, 2010. She will be missed greatly. 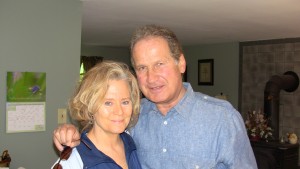 About to say good-bye again ~

On a personal note, I am writing a daily journal of “life at home” while James is in Africa. We’ve never taken the time to count the exact number of trips he’s made and the number of our goodbyes. The estimate of twenty-one or so has served to make the point that he has gone there a lot. On “Day 3”, which was last Friday, I pulled out James’ old U.S. Passport and attempted to count the Tanzanian, South African, Mozambique-ian (heh-heh), and Kenyan visas stamped on the pages. I wasn’t able to do it which was daunting for me since I love to count things.  Anyway, he’s been using his new passport since the trips in 2003 so I would only have half the number anyway. 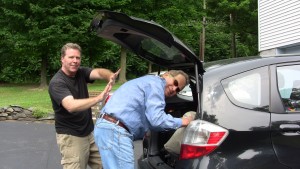 Paul trying to pack James into the back of the Subaru.

Here’s a shout-out of “thanks” to our H4C Philippines Director, Paul Grimsland. Paul drove James to JFK on June 16th and there’s a good possibility that he will be making the trip down to JFK again when James returns. Don’t tell Paul I said that though.

Paul is punctual and reliable and a good friend who’s heart burns for doing what he can to provide educational opportunities for impoverished youth through our child sponsorship programs. I can tell you that Paul loves these kids! By way of making that point, read some of his MBELE! blogs posted earlier in the year. (See the archive box up above to the right.) Another tremendous friend, Vinnie Smith, has altered his work schedule many times in order to transport James to and from airports. Wow, personal drivers sure make the difference in getting started from home and getting back to home. 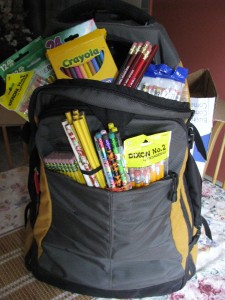 This backpack in the picture above holds a lot of pencils, more than one thousand, and a lot of caring by the students of Radnor High School which is located west of Philadelphia in the great state of Pennsylvania. I plan on writing a blog titled, “The Journey of the Pencils”, to tell the entire fascinating story once James sends me a picture of the recipients in Africa. However, this will be the first “thank you” to all those PA residents who assumed a role in this effort to demonstrate concern for the children in an African village school.

Finally, H4C sends thanks to all of you who financially support our water, medical, trade-training, and educational projects in Africa. If you are newly learing about HOPE FOR CHANGE  please visit our web site www.H4Cinternational.org and learn more.