This week, many hours have been spent interviewing potential elementary and high school students for the sponsorship program.  The  room has been filled with parents, students and brothers and sisters.  With so many in need here it’s hard to decide who should qualify.  During the interviews I observed a 12 year old who will be entering grade 7.  She came with her father, who is older than most of the parents, but also looks a lot older than he is.  I noticed her leading him around and telling him what to do, it looked like she was the parent and he was the child.

Looking over her report card there were a lot of absences and her grades were on the low side….79.9%….which compared to most of the students is low.  But there was something about her that struck me.  Just by looking at her, you could see hardship and struggle.  Her clothes, her mannerism and the way she seemed to be caretaker for her father.  My heart really went out to her, I really wanted to help her.

After the long day of interviewing, the staff started to evaluate the applications and when they came to her they called me in because they knew I had mentioned her.  I shared my thoughts and suggested that it was her environment that was mostly contributing to her poor performance and maybe all she needed was the encouragement from other students and staff in the program.

Today as I was doing my visiting I stopped in to see how the other interviews were going.  As I was preparing to leave, this girl showed up with her dad.  They wanted to check and see if she would be included in the sponsorship program.  I called one of the staff and said, “let’s talk to them”.  So we asked if we could go to their home and visit for a while.

We arrived at building 16 unit 317.  Compared to other units, it’s really in poor condition.  Elena, the young girl, is the youngest with 4 older brothers.  We asked a lot of questions about their life and why she had so many absences, trying to discern the situation.  The longer I was there, the stronger my desire to help her.  She said she would be diligent in her studies and the father said he would make sure she attended the high school meetings.  As we talked on the way back the word “gamble” came up.  Maybe it is a gamble to help Elena, but it’s a risk I’m willing to help, I’m willing to “gamble” on Elena and give her a chance!  So, she will be sponsored for a year and we’ll see if the help and encouragement she’ll receive will make a difference……I’m betting it will! 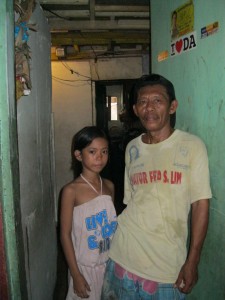